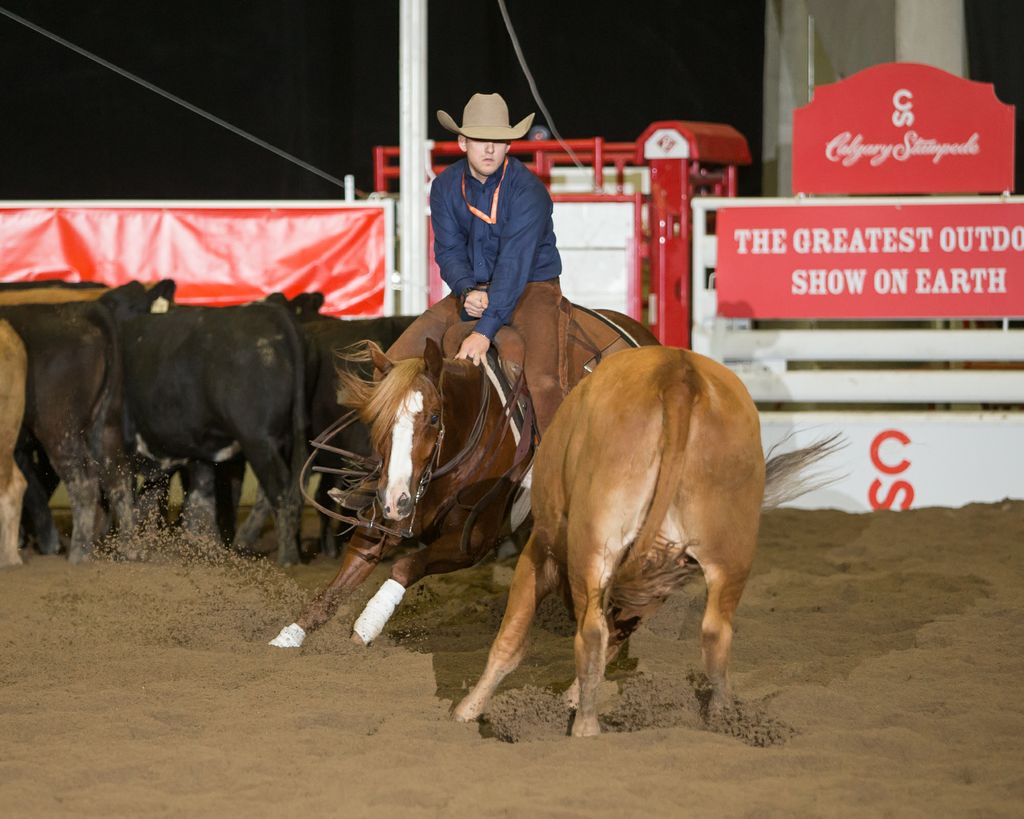 Calgary – Keeping his eyes on the prize in more ways than one paid off for Travis Rempel in the Open division final of the Cutting Horse Competition Wednesday at the Calgary Stampede.

Rempel took the Champion title in the Agrium Western Event Centre riding This Cats Max, a seven-year-old gelding the 29-year-old horse trainer from Abbotsford, B.C. has had in his line of sight for a while.

“I’ve been in awe of what this horse can do,” a jubilant Rempel said. “You can tell how solid he is and how he can put his head so low and just hoop around. He’s such a pretty horse with his blaze and his flaxen mane. He just can really stop and really swoop. He just makes everything so pretty.”

That the duo did in their second go, notching a score of 225, enough to take home a cheque for $8,166, plus hardware including a Stampede Champion belt buckle, and a Mercuria/National Cutting Horse Association buckle and bronze. This Cats Max is owned by Doug and Angie Wiens of Lindell Beach, B.C., just outside of Chilliwack.

The sport of cutting highlights the pure athleticism, instinct, agility and intelligence of the cutting horse. With horse-and-rider teams attempting to cut at least three individual head out of a herd of cattle within 150 seconds, cutting has evolved into one of the most exciting equine events in North America.  Since 2009, the Stampede’s Cutting Horse Competition has been a participating event on the Mercuria/NCHA World Series of Cutting. Thanks to the involvement of the NCHA’s World Series, the Stampede’s cutting showdown featured $25,000 in added money in each of the Open and Non-Pro divisions.

Rempel almost finished one-two in the Open division, but was nudged out by Rancho Murieta, Calif.’s Jason Taylor. Taylor was named Reserve Champion for his 222 on Cats In Ya Dreams, owned Carol Ward, earning $6,933 and a Stampede buckle. Taylor’s the trainer in residence at Ward’s California operation.

It was a good day for Ward, as she took the Non-Pro division on Spooked By A Cat, a 10-year-old gelding with more than $250,000 in lifetime career earnings. A 221-point ride in the second round earned a three-peat at the Stampede for Ward, who took the same title in 2011 and 2012, but missed placing during her last outing here.

“I feel like I redeemed myself, because in my third attempt (at the Stampede), I missed my cut — the first cut — and it felt like the oxygen went out of the arena. I just wanted to keep it clean this time,” Ward said.

After setting the pace as the first to cut, Ward had to watch the seven other riders try to match her ride, a prospect that made her more than “a little nervous.” She stayed on top of the leaderboard and earned $10,936 as the Champion. Fifteen-year-old Andrew Viola of Fort Worth, Tex. came closest with 216, riding his own horse, Louellas Cat. The Reserve Champion nabbed $8,702 for his ride.

When asked what advice she would give young riders, Ward recounted a story she told earlier in the week. Ward’s niece was showing in jumping at Spruce Meadows, but was wondering if it might be time to concentrate on a career.

“She looked a little down,” Ward said. So she told her niece, “In my life, I’ve spent a lot of time doing a lot of things. And I’ve wanted to do a lot of things. But I never regretted one single minute I spent on a horse.”