CALGARY – Tony Troendle has arrived at a clipper compromise. And it’s just filled that one remaining space in his trophy cabinet.

After previously winning every other major competition on the continent, Troendle finally laid claim to the Calgary Stampede’s North American Sheep Shearing Challenge title on Saturday night in the Agriculture Building. Troendle, of Lead, S.D., knocked off Hilary Gietzen of Minot, S.D., in Saturday’s open-division final – a personal triumph in his quest to be fast, but thorough, at his chosen craft. 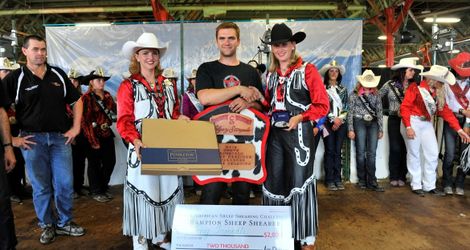 “It’s indescribable. It feels really, really good to win Calgary,” said Troendle, 26, who began competing at the Stampede in 2006, and was runner-up in each of the past two years.

“It’s a balance. Where the younger guys typically go a little faster, the older guys tend to go a little smoother. And that’s where the points system (like the Stampede uses) really comes into play,” added Troendle. “You’ve got to find a happy medium. That’s what I’m trying to do – smooth it out, but still maintain speed.”

After four rounds of preliminaries on Friday and Saturday, the Stampede’s 16th annual North American Sheep Shearing Challenge came down to the semifinal round involving Troendle, Gietzen, Peter Demooy of Saanichton, B.C., and Mike Pora of New South Wales, Australia.

Troendle and Gietzen emerged from that struggle to set up an all-Dakotas championship final, just as they’d done in 2010. And this time, it was Troendle who held the quick, steady – and ultimately upper – hand. He sheared six sheep in six minutes 29 seconds, compared to Gietzen’s seven minutes and 39 seconds, and with the judged portion of the competition a virtual saw-off, came out ahead with a total of 46.95 points, compared to Gietzen’s 49.28.

“I was pretty steady going into the semifinals, and I found a comb that worked really well. I left the same comb on in the final, and gave ’er heck,” said Troendle, who’d previously won the National Western Stock Show in Denver, the Black Hills Stock Show in Rapid City, S.D., and the Miles City Bucking Horse Sale competition at Miles City, Mont.

The Stampede’s shearing challenge is both a timed and judged competition, with one point added for each 20 seconds in time. Judges also assess points for second passes with clippers, and later examine the animals for remaining ridges and tufts of wool and inadvertent small cuts or nicks in the skin.

While things went smooth as silk for Troendle in the final, the same couldn’t be said for Gietzen.

“I sheared the best I ever did in the semifinals tonight, and that put me into the finals,” noted the Stampede’s 2010 champion. “In the finals . . . a good workman never blames his gear, but I did not have my equipment up to spiff. I knew it, I could hear it, and other shearers could hear it as well. You could not only see, but hear, that it was not working.

“My eyesight is not what it used to be, and perhaps the last time I used (that particular clipper), I used it on some dirty sheep. I probably did not have it completely sharp . . . it was nobody’s fault but my own,” he added. “But at the same time, Tony has been shearing very, very well. He did very well in the final tonight. Even if I had sheared properly, I’m not sure I would have come out ahead. He was so on tonight.”

In Saturday’s intermediate final, Matt Breakey of Bragg Creek, Alta., defeated Clive Reynolds of Airdrie, Alta. – shearing two sheep in four minutes 11 seconds, compared to Reynolds’ time of 4:55, and coming out ahead with a total of 42.05 points to Reynolds’ 47.75.

Australia, consisting of Pora and Steve Mudford, won the International Team Challenge over second-place Canada and the third-place United States. Australia scored 87.81 points, while Canada totaled 111.82 and the U.S. ended up with 113.29.