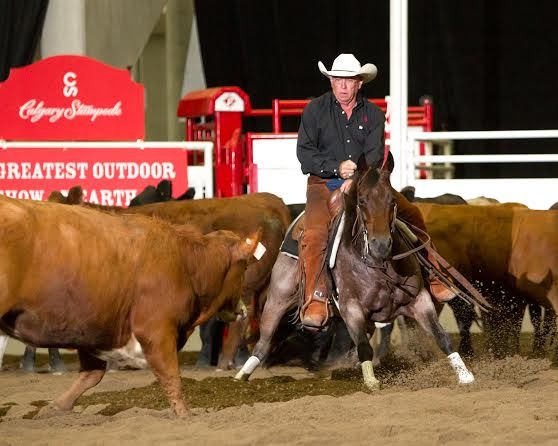 Calgary – At 67, some people just can’t compete the way they used to. Chubby Turner of Weatherford, Texas isn’t one of those people. Astride the same mare he won with in last year’s Stampede round in the Mercuria World Series of Cutting, Turner bested a top-notch field in the Open class on Wednesday night and earned another buckle for his collection.

“I’ve always loved this place,” Turner exulted. “To be a champion here four times is just unbelievable.” Turner won his first Calgary Stampede cutting title in 1994. It was 2012 before he won again, but nobody else has won since. “If I have to walk, I’ll be back next year,” he promised.

The sport of cutting shines a spotlight on the pure athleticism, instinct, agility and intelligence of the cutting horse. With horse-and-rider teams attempting to cut three individual cows out of a herd within 150 seconds, cutting has evolved into one of the most exciting equine events in North America as the horses and cattle match wits, side-to-side and step-for-step. The NCHA counts more than 20,000 members from a wide range of backgrounds, and sanctions more than 2,200 events across North America each year, with tens of millions of dollars in prize money awarded.

In the first Open go on Tuesday, Matt Gaines, also of Weatherford and the National Cutting Horse Association points leader, finished the day with top points. Lindy Burch of Weatherford and Turner were next in line. Gaines was the last man out on Wednesday, while Turner drew the second spot.

“Ordinarily, second would be an unbelievable draw, but I don’t think it made a difference,” Turner said. A big part of a good cutting exhibition is choosing cattle that will challenge the horse’s ability. “I did not cut a single cow,” Turner claimed, explaining that every animal that he chose to separate from the herd didn’t co-operate. “I just cut what was there. I more or less cut the cows that would let me cut them rather than the ones I wanted.”

Circumstances like the difficult cattle riders encountered on Wednesday evening suit his style better anyway, Turner said. “I kind of go with the flow. It’s been working better for me.” Fortunately for Turner, the cattle he ended up working with showed considerable spirit as they challenged his horse’s ability. “You have to get the best dance out of them you can,” he said.

His mare, One Time Choice, doesn’t mind improvising either, Turner noted. “That mare’s kind of a character. She’s pretty fractious, but she’s really special. She just has those little quirks about her. Sometimes great horses are just that way.”

Alberta riders secured the honours in the Non-Pro class. Marla Gonnet of Cayley, whose husband Dustin was last year’s Reserve Champion in the Open class, rode the couple’s Dirty Dreamin to the Grand Champion title. Michelle Lund of Red Deer is the Non-Pro Reserve Champion. She rode You’ll Miss Me for Pekisko Ranch. 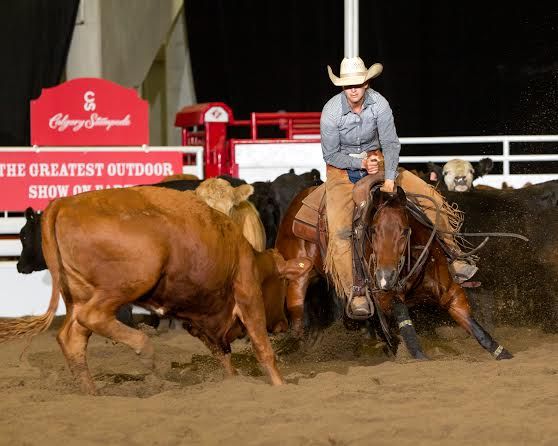