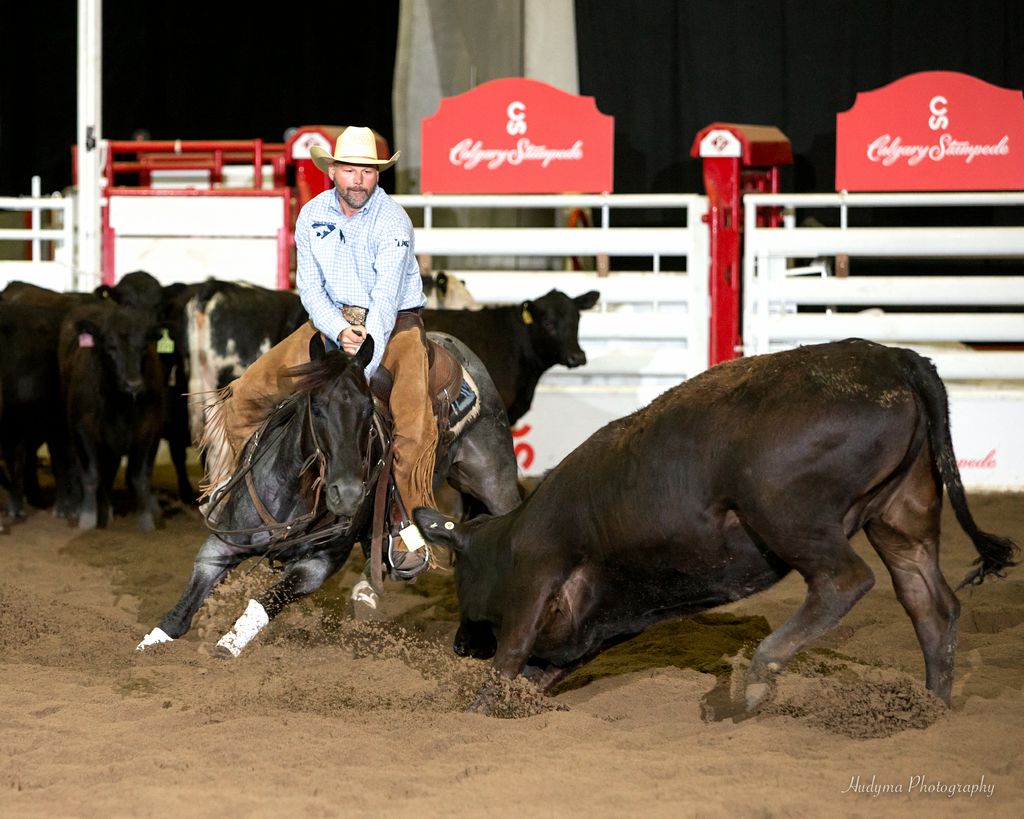 CALGARY — The hashtag #Stampede2018 was trending with the Rice family on Friday. So was #winning.

Not only did Tatum Rice take the Champion title in the Open finals of the Stampede’s Cutting Horse Competition — part of the Mercuria National Cutting Horse Association (NCHA) Series of Cutting — on the stallion Hashtags, but his wife Kylie nailed Reserve Champion in the Non-Pro finals.

“It turned out really well for both of us,” Tatum Rice said of the cumulative $19,421 payday. “This is my second Stampede and I came in second last year. I didn’t do a great job of picking cows for Kylie last year, so she didn’t make the finals.”

Hashtags, a five-year-old blue roan out of Metallic Cat and Dual Rey Tag, sits in the No. 1 spot on the NCHA rankings. Rice has trained the horse at his facility in Weatherford, Tex. since it was acquired as a yearling by Hashtag Ventures LP.

“I have had other horses that are that cowy, but never had one that has the whole package: the strength and the feel and the desire,” Rice said. “If you asked me what I would change about him, I don’t know what I would say.”

Rice let his work in the arena do the talking. In a strong field of eight contenders, Rice and Hashtags laid down an inspiring, blazingly athletic 228-point ride to take the Champion title, along with two belt buckles, a commemorative bronze, a blanket and a cheque for $11,304.

“I was trying to cut my cows aggressively and get a hold of them and get way up and he took care of the rest,” Rice said shortly after his win in the Nutrien Western Event Centre. The title of Reserve Champion (and its accompanying $8,978) went to Brent Erickson of Wilton, Calif. for his 221-point performance on Spookys Catchin Reys, owned by Jeff Barnes, also of Wilton.

Done well, cutting is an art form, as well as a sport. A horse and its rider attempt to cut at least three individual head of cattle from a herd within 150 seconds. Once a cow has been “cut,” the rider drops the reins. Thousands of hours of training now come into play, along with the horse’s instinct and intelligence. Using its cow sense, the horse performs an elegant, athletic dance. It dips and swoops, pivots and darts as it tries to break the cow’s desire to rejoin the group. Once the cow is “quit,” the rider can select another animal to cut.

A panel of three judges add and subtract points to each competitor’s base score of 70, depending on how the team performs in the arena. The Calgary Stampede Cutting Horse Competition is the only Canadian stop on the Mercuria NCHA World Series of Cutting. Since 2009, the Stampede’s Cutting Horse Competition has been a participating event on the Mercuria/NCHA World Series of Cutting. Thanks to the involvement of the NCHA’s World Series, the Stampede’s cutting showdown featured $25,000 in added money in each of the Open and Non-Pro divisions.

Watching her horse Kattalyst qualify for the Open finals was just the motivation Non-Pro rider Elizabeth Brumbaugh Quirk needed on her first visit to the Calgary Stampede. The six-year-old mare, out of Hottness and Metallic Cat, is owned by Quirk’s parents’ Ten/27 Ranch and ridden by Quirk’s trainer, Adan Banuelos.

“I had a tough first go. I didn’t show very well. In the second go when I saw my mare make the Open finals, I thought, ‘I have to do a better job. I didn’t come all this way to Canada to not show well,’ ” Quirk said. “I told myself to show better and be smarter. She is such an incredible horse. Really, she takes care of me. It’s a group effort.”

The resident of Denham Springs, La. made all that driving to Canada count in the finals, though, conducting a master class in cutting that had her mare darting and pivoting at lightning speed, with her hind end so low it appeared as if she was sitting at one point. Quirk’s second cut was particularly impressive, earning spontaneous shouts of appreciation and applause from the crowd.

“That was so much fun! I have to say it was much fun! After I cut the second cow and saw 50 seconds on the clock, I literally took a deep breath, and my trainer Adan shouted, ‘C’mon get in the herd!’ I settled down and knew I had to finish it.”

That she did, posting 227 points on the board, giving her the Champion spot over Kylie Rice’s 222 on Snap Crackle Cat. Quirk’s ride earned her $9,646, two buckles, a commemorative bronze and a blanket. Rice’s Reserve win meant she contributed $8,117 to her family’s winning ways at Stampede.

The Championship title in the Senior World Tour Division went to Debbie Day of Reno, Nev. with a 216 ride on Catchayalater, owned by Dacole Investments Co. And this year’s winner of The Bill Collins Youth Showcase was Colten Powell of Olds, Alta. Colten posted a 217 ride on his own horse Quick Pepcid to take the top spot and $2,000 in scholarship money.