U.S. Navy vet Bond will run a tight ship at Cowboy Up Challenge

U.S. Navy vet Bond will run a tight ship at Cowboy Up Challenge

CALGARY – If it seems as though Robin Bond performs in the saddle with military precision . . . that’s because she does.

Bond, a Vista, California-based horse trainer, will be making her third consecutive appearance at the Calgary Stampede Cowboy Up Challenge when it takes over the Scotiabank Saddledome from Saturday, July 7 through Monday, July 9. 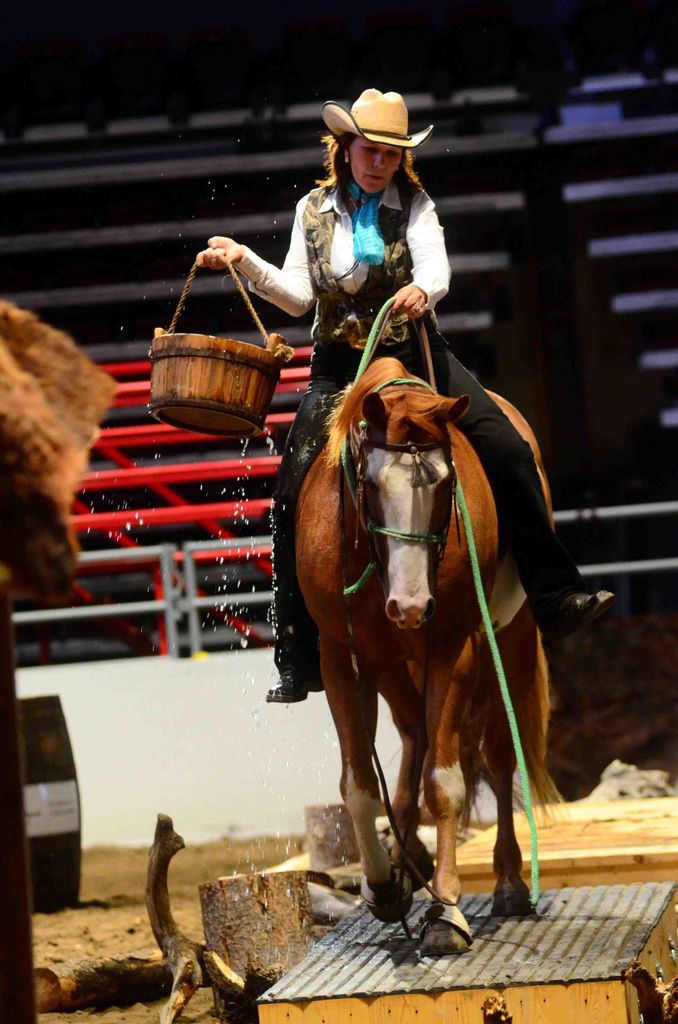 Bond spent six years in the U.S. Navy, four of them with an aircraft ground handling crew at Naval Air Station (NAS) North Island in San Diego, Calif. Try scurrying under a jet fighter to insert stabilizing pins in its landing gear, with the engine screaming away a few feet from your head and your superior officer roaring at you from a distance . . . and you’ll start to understand performance under pressure.

“Oh, sure. Stress management — that’s what the Navy gave me. You’re under a lot of pressure to get the job done right, and get it done quickly, with a lot of distraction,” says Bond, who also repaired hydraulic systems for F-14 Tomcats. “You can’t drop any tools or lose any hardware, of course, because that could potentially lead to catastrophe. You need absolutely fantastic situational awareness — knowing where you are, where everything else is, and where it’s going to be at any given time.

“And I have to say that prepared me very well for performing in (Extreme Cowboy Association) races,” adds Bond. “You have the crowd, the pressure of going fast, getting it done right without mistakes . . . you have to handle your nerves. And that job sure taught me how to handle my nerves.”

Since its debut at the Saddledome in 2010, the Cowboy Up Challenge has become a marquee event — both for the Bluff Dale, Texas-based EXCA, which holds dozens of Extreme Cowboy Racing events across the United States each year, and the Stampede itself. “It really came as a turn-key event that attracts and captivates a large group of spectators,” notes Pete Fraser, an advisor to the Stampede’s Cowboy Up Challenge. “It’s rapidly turned into a must-see event. It’s huge. It sells itself. It’s easy to understand. You’ve got the Jumbotron going with multiple TV cameras, you’ve got loud music . . . and as this year’s lineup confirms, you really do have the best Extreme Cowboy Racing competitors in the world.”

In recent years, Extreme Cowboy Racing — the brainchild of Craig Cameron, known as the “cowboy’s clinician” — caught on like wildfire as the fastest-growing sport in the equine industry. A timed and judged event, Extreme Cowboy Racing demands both horsemanship and speed, and challenges both horse and rider with an obstacle course that may include moguls, bridges, log crossings, tunnels, cowboy curtains, roll backs, and water crossings, among others. Judges award points for each obstacle, on a scale of one to 10, based on criteria such as horsemanship, cadence, control, and overall execution. Horse-and-rider teams are required to complete each obstacle within a predetermined time period to collect points.

The 2012 Cowboy Up Challenge will start with a pair of preliminary go-rounds on Saturday, July 7 and Sunday, July 8, kicking off at 3 p.m. both days.

The field of 12 horse-and-rider teams — five from Canada, seven from the U.S. — will be thinned to 10 for the championship final on Monday, July 9, also at 3 p.m. The winner will walk away with a cheque for $7,000, while the runner-up will collect $4,000. Both the grand and reserve champion will also receive handtooled Stampede buckles.

And, as Fraser notes, there are certainly no weak links in this year’s starting lineup. Bond, who’ll be back with Jose’s Perfection, was Pro reserve champion at the 2011 EXCA world championship at Guthrie, Okla., and finished second at the inaugural Cowboy Up Challenge in 2010. Laurie Shelton of Dripping Springs, Texas, who won the Non-Pro title at the 2010 EXCA world championship, will be coming to Calgary aboard Poncho. The Stampede’s past two champions — Glenn Stewart of Baldonnel, B.C., on Genuine Jet Smooth in 2010, and William (Runt) Rageth of Harris, Mo., aboard Burdock last summer — will also saddle up. And then there are the equine superstars — like Flying Diamond The Bailef, a Welsh Pony, who’ll team up with partner Wendy Stephens of Vivian, La., the first woman to win an Extreme Cowboy Race; and Eli the mule, a true character, who’ll arrive with rider Obbie Schlom of Silverado, Calif.

“We have a reputation here at the Stampede as having the toughest — and the most creative — courses in the world. We push the teams out of their comfort zone,” says Fraser. “And yet, we only use those courses once . . . and then we come up with a whole new challenge.”

Bond is one of four riders competing at the Cowboy Up Challenge for the third straight year, along with Stewart, Kateri Cowley of Exshaw, Alta., and Tammy Botsford of Chestermere, Alta., and she’ll be looking to rebound from a difficult 2011 Stampede. Jose’s Perfection was recovering from ankle surgery, and Bond’s mount at Calgary, I’ll Cowboy Up, was spooked by the Saddledome lights and threw her during a warmup. Bond soldiered on with cracked and/or separated ribs, finishing seventh overall. “With an injury like that, it only hurts when you breathe . . . unfortunately, you can’t stop doing that,” she laughs.