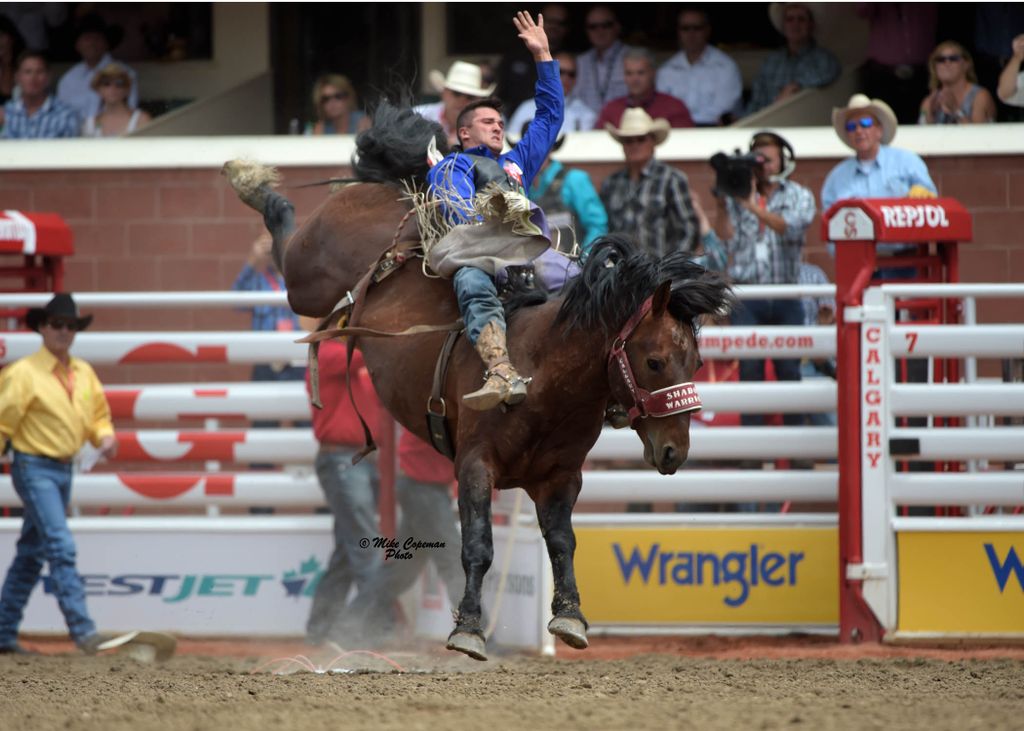 Calgary - The journey to rodeo’s richest Sunday has begun with contestants in Pool A already dipping into the Calgary Stampede's $2 million jackpot. In the opening round of competition, past Stampede winner Caleb Bennett took the $5500 for first place, riding the Calgary Stampede's Shadow Warrior to 87.5 points.

“I’d been on that horse before, but today he was a lot more challenging,” grinned the 27-year-old Utah cowboy. “There wasn’t one jump throughout the whole ride where I felt like ‘oh, I got you’. It was just a fist fight, kind of a battle the whole eight seconds.”

The last time Rusty Wright took home a bronze on the Calgary Stampede stage, he was the novice saddle bronc champion. But he’s $5500 closer to winning the $100,000 prize after taking first in the regular saddle bronc riding competition. The 20-year-old from Utah, one of three from the Wright clan riding at this year’s Stampede, was 87.5 points on another Stampede horse, Wild Cherry.

Staying in Utah, Clint Robinson claimed the tie-down roping honors with a 7.6 second run, netting him the $5500 in that event. Stampede newcomer Tyler Waguespack from Lousiana made his first Canadian rodeo appearance a valuable one, wrestling a steer in 4.3 seconds to be fastest of the round and collect his $5500 payday. Barrel racer Mary Burger of Oklahoma and her horse Mo dashed around the barrel pattern in 17.46 seconds for the speed reward of $5500.

Only three bull riders managed to make the whistle Friday, with two-time Canadian champion Dakota Buttar of Kindersley, Saskatchewan the best of the bunch. He was 87 points on Houdini Magic for first place. But he and the bull butted heads after the eight seconds, so Buttar was headed back to a place he knows too well – the Canadian Pro Rodeo Sports Medicine Team, to check out any potential concussion issues.

“As the ride went on, the bull kept getting stronger, and kind of wanting me on his head. At the end, he finally got me, and whipped me down pretty hard,” he winced.

Round two with Pool A competitors goes Saturday afternoon. The top four finishers in each Pool go directly to Showdown Sunday at the Calgary Stampede.