Weinberger back in winner’s circle with lightweight horse-pull triumph

Weinberger back in winner’s circle with lightweight horse-pull triumph

CALGARY – At this level, notes Dennis Weinberger, it’s about strength, fortitude, stamina . . . and the odd horseshoe, too.

Weinberger, of Cochrane, Alta., returned to the winner’s circle at the Calgary Stampede’s Heavy Horse Pull on Friday night, knocking off rival Randy Dodge of Albany, Ore., in the lightweight division under the Big Top. 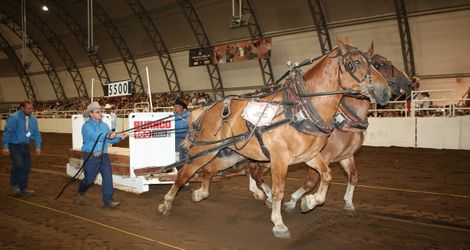 The two teamsters went to a seventh round before Weinberger’s Catalyst Accountants-supported Springbank Belgians team of King and Kris found an extra reserve of strength – pulling a 9,500-pound weight sled the full 14 feet, compared to the 44-inch effort turned in by Dodge’s Stampede Messenger & Express-supported Belgian duo of Red and Bud.

It’s the sort of Stampede hammer-and-tongs battle that Weinberger expects at Canada’s premier pull, and the richest pull in North America.

“We pulled down in Florida this year against the best in the world, I’d say, and on an eight-pull circuit, we were everywhere from first to seventh out of 12 teams,” said Weinberger, who co-owns his Stampede heavy horse teams this season with Scott Fisher of Edwardsburg, Mich. “It’s a little bit like stock-car racing. When you get the best of the best, it’s the tiny little things – how they set themselves up, how they feel the ground – that can move you around a few spots.

“You don’t ever want to get to that level and get cocky and think, ‘I’ve got it.’ Because you don’t.”

Weinberger, who won the first triple crown in Stampede Heavy Horse Pull history by sweeping all three divisions – lightweight, middleweight, and heavyweight – in 2010, pockets $3,000. Dodge, who followed that lead by winning the Stampede trifecta last summer, collects $2,500 for second place. Kim Hewalo of Pilot Butte, Sask., and his Sterling Western Star Trucks-supported Belgian team of J.R. and Nick finished third, good for $2,000, by lasting to the fifth round and pulling an 8,500-pound sled eight inches.

Frank Peters, who pulled all the way from Bright, Ont., placed fourth with his Befus Construction-supported pairing of Diesel and Doc, who pulled a 7,500-pound sled 78 inches, and stuffs $1,750 in his jeans for gas money and feed.

Dodge, who has replaced now-retired puller Rocky with five-year-old Bud, was satisfied with that reserve championship showing. “(Red and Bud) pulled good. I’d say the best team won. (Weinberger) was just better than I was all night,” said Dodge. “(Red and Bud) work good together as a team. They do pretty well. The young guy’s coming along pretty good.”

This year’s Stampede Heavy Horse Pull has drawn teamsters from as far away as Oregon, Michigan, and Ontario, with outfits primarily featuring Belgian and Percheron horsepower.

The teams of the Stampede’s lightweight division, which drew a seven-team field this year, weigh in at a combined two-horse weight of 2,400 to 3,000 pounds.

Among the three Heavy Horse Pull divisions, the lightweights are the only equines that regularly pull three times their weight. Weinberger’s winning duo, which tipped the scales at a combined 2,893 pounds, ended up pulling 3.28 times their own weight during Friday’s seventh and final round.

The Stampede’s Heavy Horse Pull will continue for two more nights under the Big Top. The teams of the middleweight division, weighing a combined 3,001 to 3,500 pounds, step into harness on Saturday, July 14 at 7 p.m., while the equine titans of the heavyweight division, tipping the scales at a combined 3,501 pounds and more, take over the spotlight on Sunday, July 15 at 7 p.m.

Owing to the Stampede’s 100th birthday bash, the Heavy Horse Pull committee is introducing a Centennial Trophy this year. The horse-pull hardware will bear the names of the winners in each weight class for 2012 and beyond.