CALGARY – The heavy hitters stepped up to the plate. And, to no one’s surprise, they swatted it out of the park.

The heavyweight division final of the Calgary Stampede’s Heavy Horse Pull, which traditionally closes out The Greatest Outdoor Show on Earth, shaped up as a doozy Sunday evening. Because among the nine-team lineup were the 5,288-pound pairing of Big Roy and Bob, owned by Stan Grad’s Airdrie, Alta.-based Soderglen Ranches and teamstered by Randy Dodge of Albany, Ore. – one horse of which had helped author the existing Stampede weight record of 13,300 pounds set in 2011. And also in the mix were the 5,475-pound Springbank Belgians duo of Jesse and Sam, teamstered by Dennis Weinberger of Cochrane, Alta. – one horse of which was involved in setting a world weight record in Michigan last fall. 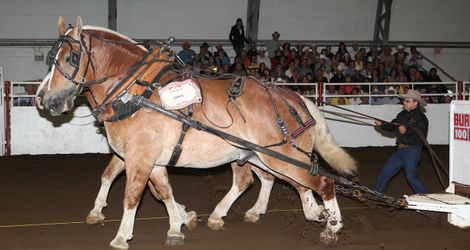 The result was a heavy-duty display of might and muscle. Because after the Copp’s-supported team of Jesse and Sam had won the division by pulling a 12,500-pound weight sled a distance of 154 inches, they came right back into the infield and rewrote the Stampede’s Heavy Horse Pull record books – dragging a 13,400-pound sled the full 14 feet.

Last September, Weinberger’s team of Jesse and Doc had set a new world record in the heavyweight division at the Hillsdale County Fair in Hillsdale, Mich., pulling a weight of 4,850 pounds a distance of 30 feet, 10 inches.

And this year, the new team of Jesse and Sam is batting 1.000, noted Weinberger’s longtime horse-pulling partner Scott Fisher of Edwardsburg, Mich. “This is only the second time we’ve pulled together with them,” he said. “We took the Appalachians Mountain Bounty in Pennsylvania with this pair in May, and set a record there, too. Two pulls, two records.”

Heavyweight division teams tip the scales at a combined 3,501 pounds or heavier at the Stampede’s Heavy Horse Pull, which is Canada’s premier pull and the richest pull in North America.

By the time the weight sled had been loaded down with 10,500 pounds’ worth of concrete on Sunday, five teams were still alive. One round later, at 11,000 pounds, it was just three. And at 12,500, the tape measure needed to be employed to determine a winner.

Weinberger’s duo set the bar, with that 154-inch pull. Next up were the Antony Family-supported pair of Little Roy and Lane, Grad’s second outfit teamstered by Nicolas Pouso of Mercedes, Uruguay, which managed 45 inches. And when the New West Truck Centres team of Big Roy and Bob could only manage 91 inches, despite the best teamstering efforts of Dodge, it was all over – with Weinberger earning a first-place cheque for $3,000, Dodge collecting $2,500 for second, and Pouso accepting $2,000 for third.

“All three teams that were left have horses with an incredible level of ‘try,’ ” said Dodge. “I think we put on a pretty good show for the crowd. I hope they liked it.”

With the vast majority of the Stampede’s Heavy Horse Pull field consisting of Belgians, the next stop on the horse-pull circuit for many of these teams is the seventh North American Belgian Championships in Brandon, Man., which begins Tuesday.

Owing to the Stampede’s 100th birthday bash, the Heavy Horse Pull committee has introduced a Centennial Trophy this year. The horse-pull hardware will bear the names of the winners in each weight class for 2012 and beyond.