The 2012 Centennial Stampede is less than four months away. While your cowboy hat and boots may not be top of mind in March, there is lots to start getting excited about as July draws near. 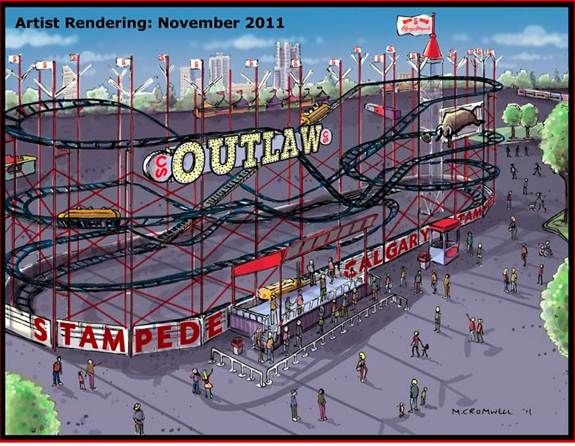 The name of this year’s TransAlta Grandstand Show is simple, and yet powerful. “Century” is a musically driven spectacular that celebrates the Stampede’s Centennial. The show will feature popular songs from the last 100 years, and will be a fast paced, visual feast of colours. The Stampede is thrilled to announce that – for the first time ever – the Grandstand Show will feature the talents of a home-grown country music sensation – Paul Brandt. Paul will be joining The Young Canadians of the Calgary Stampede on stage every night to tell the story of the Calgary Stampede from beginning to end. He will also perform one set each night.

For the first time ever the RCMP Musical Ride will be opening the rodeo every day during the 2012 Calgary Stampede. The RCMP will have a tent on the Park where the public will have the opportunity to interact with the animals and RCMP members.

Located on the Midway, the zip-line will be approximately 80-feet high, 850-feet long and guests will reach speeds of up to 60 km/hour. It is the largest temporary freestanding zip-line in North America.

Over 4,000 competitors from around the world will compete right here in Calgary during the 10-day Stampede. The competition will be held at various locations around Calgary, with the finals at the Scotiabank Saddledome on July 10, 2012.

The Agriculture Centennial Celebration Zone will be open daily throughout the 2012 Calgary Stampede and will be open to visitors from around the world. At the same time it will also welcome back former volunteers, exhibitors, participants, sponsors, and champions from a century’s worth of agricultural competitions and exhibitions. The celebration will be held at the Victoria Pavilion, which served as the center of the Stampede’s agricultural activities for decades.

The Zone will feature engaging displays representing all of the Stampede’s agricultural events and showcases including the World Championship Blacksmiths’ Competition, the Heavy Horse Pull, the Cutting Horse Competition, Draft Horse Town, the World Stock Dog Championship, and the North American Sheep Shearing Challenge to name a few.

New for this year, the Stampede will feature the Bell Centennial Plaza – this all new entertainment plaza will be located at the center of Stampede Park and will host the best of Alberta’s talent alongside performers from around the world. Each night the plaza will ignite with fireworks and music in celebration of the Stampede’s Centennial.

Tickets are on sale now! Become a Stampede insider for the most current Stampede news. Follow us on Twitter and join the Calgary Stampede’s Facebook page.

Photo caption: Outlaw is one of the new rides at the Midway for 2012.