CALGARY – Thankfully, there’s no collective bargaining agreement to discuss in the off-season. But when Wes Gordeyko starts putting together a hitch of heavy horses, he’s trying to assemble a Stanley Cup contender.

“Sometimes I compare it to building a hockey team. These days, everyone’s so competitive — you’ve got to view them, and treat them, like an athlete,” says Gordeyko, who runs Willow Way Clydesdales, in Ohaton, Alta., with his dad Allan, his mom Elouise, and his girlfriend Kristen Wilkieson. “We keep at it hard, driving them with a light wagon, for weeks leading up to a show. They’ll get equine massage treatments, and we’ll patch ’em up as best we can. There are bumps along the way, but when you accomplish what you set out to do, it’s special, that’s for sure.” 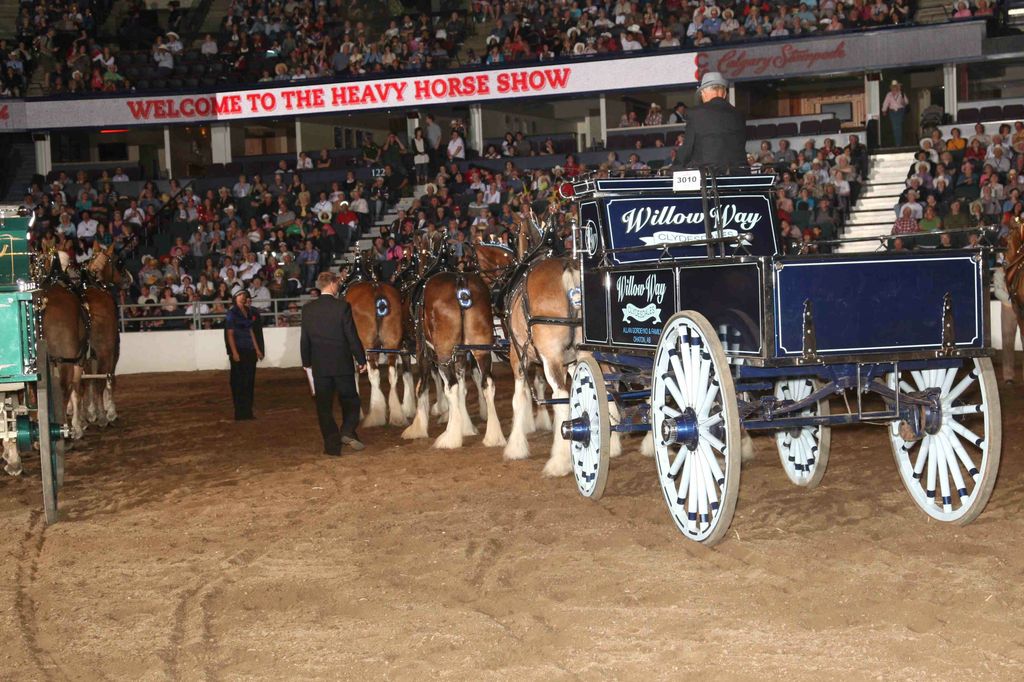 The Willow Way Clydesdales will be in fine form, as always, for the World Championship Six Horse Hitch Competition — the jewel of the Calgary Stampede’s annual Heavy Horse Show, presented by Halliburton — which takes over the Scotiabank Saddledome on Sunday, July 8. For the 13th consecutive year, the World Championship Six Horse Hitch Competition will feature live musical accompaniment by members of the Calgary Philharmonic Orchestra.

The Gordeykos and their Clydes may not have captured a World Six title yet at Calgary — in recent years, they placed as high as third overall in 2009 — but they’ve definitely found a heavy horse Holy Grail. In 2007, the crew from Ohaton, which has been fielding hitches of mares for the past six years, captured the Supreme Six title at the quadrennial World Clydesdale Show in Madison, Wis.

“A tremendous honour,” notes Bruce Roy, a heavy-horse historian and a Stampede volunteer since 1959. “I announced the show, and there were something like 600 Clydesdales there — some bred across this continent, north and south of the 49th parallel, and some imported horses from the British Isles, too.”

Another group of mares — the Percherons of the Jackson Fork Ranch outfit, based in Bondurant, Wyo. — enters the Stampede’s 2012 Heavy Horse Show as the two-time defending champions of the World Six, with former Albertan Brian Coleman holding the reins. In all, 15 rigs from across North America will compete in the marquee World Six event, which offers $10,000 to the champion. A panel of three judges will rate the entries for conformation, presentation, driving, and reinsmanship.

Since 2000, horses in cart and hitch at the Stampede’s Heavy Horse Show have been stepping in time to specially selected music, courtesy of the CPO and its world-class talent. Elite horses and musicians will perform together at the Saddledome throughout the Heavy Horse Show, with feature performances on Friday, July 6 at 7 p.m., and Saturday, July 7 at 12 p.m. and 7 p.m., as well as the World Six Horse Hitch finale on Sunday, July 8 at 12 p.m. Those four performances will involve a full 38-member orchestra of CPO musicians, led by the CPO’s associate conductor Mélanie Léonard, playing a selection of light classics. The 12 p.m. performance on Friday, July 6 will feature a quintet of musicians from Foothills Brass, who’ll lend the proceedings a rock-and-roll flavor.

In honour of the Stampede’s Centennial, CPO musicians will be playing special selections from each decade of the past century — the Colonel Bogey March, Oklahoma, and Pirates of the Caribbean to name a few — in addition to classical favourites. “The pairing of these majestic horses running in rhythm to some of the world’s musical masterpieces is a complete experience of discipline, sound, and beauty,” says Léonard. “The CPO is always excited to be a part of the Heavy Horse Show, and I always look forward to conducting it.”

Established in 1966, Willow Way Clydesdales was at one point the largest breeder for Clydes in Canada, selling the magnificent geldings and stallions far and wide, including to Anheuser-Busch’s famed Budweiser outfit in St. Louis. These days, the Willow Way herd numbers about 90 animals — down from its peak of around 150 a decade ago — and while the Gordeykos may only show their hitch of mares at a few select shows a year, they’re still getting plenty of acclaim.

Last year, for example, two-year-old Willow Way Jolie was named the world champion mare at the 2011 World Clydesdale Show in Madison, as well as junior and reserve champion mare at Calgary. Willow Way Ideal was named the champion stallion at Calgary, as well as the reserve champ at the Central Alberta Draft Horse Classic in Olds, Alta. Hill Topper Diamond’s Lilly was supreme champ in Olds, and all three horses were hailed all-Canadians.

“My dad (who still drives the Willow Way rig) got to like Clydes, and imported horses from Scotland to start our program,” recalls Wes. “For me, it just seemed the natural thing to do. They’re such bold, intelligent animals.”

The Stampede’s Heavy Horse Show, presented by Halliburton, features the gentle giants of the equine world in the Saddledome and the Big Top. Over a four-day span, a total of 238 Belgians, Clydesdales, Percherons and Shires from six Canadian provinces, and the U.S., will compete in more than 100 classes, starting Friday, July 6 and wrapping up on Monday, July 9. Breed Supreme Champions and the overall best in show, which will receive the Jim Peak Memorial Trophy, will be crowned Monday, July 9 in the Saddledome, beginning at 1 p.m. Classes for the four breeds include entries of cart-drawn single horses, two-horse teams, three-horse unicorn hitches, and four- and six-horse hitches.