Calgary – Annika Odegard has stampeded her way to the top! With an electrifying performance ofNothin’ But the Blues, Odegard stood out from the competition to capture the 2012 Grand Prize of $4,000, the President’s Trophy and a commemorative silver belt buckle on Saturday night. Odegard will also be representing the Calgary Stampede as they compete in the Canadian Youth Talent Competition in Winnipeg, Manitoba in November 2012. 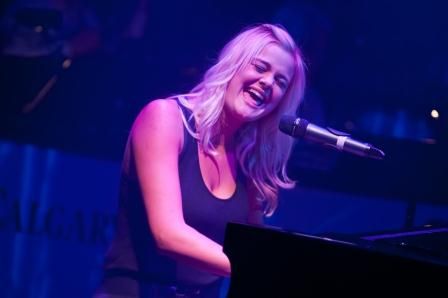 The first runner-up was Kelsey Verzotti who wowed the crowd with Taylor, the Latte Boy.Annie Pattison was the second runner-up with I Will Always Love You. The third runner-up was Layten Kramer with Harvie Heights. A special award was given to Cole Hruska who was chosen as “Fan Favourite” through text or tweet. The Don Welden Award for most promising senior performer went to Bryton Udy.

This year, approximately 250 amateur youth performers from across southern Alberta demonstrated their singing, dancing, acting, musical and variety performance abilities during auditions for this annual showcase of talent. Sixty-one senior performers (aged 13 to 21) were selected to compete for over $10,000 in prizes and a chance to take part in the Canadian Youth Talent Competition. In addition, nine junior performers (aged 6 to 12) were showcased during the eight days of competition.

The mission of the Stampede Talent Search is to discover, develop, encourage, and showcase young amateur performers from across southern Alberta. This program is just one of the ways the Calgary Stampede fulfills its commitment to provide the youth of Alberta with the opportunity to develop strong roots in their culture and heritage through programs that enhance personal growth, citizenship and education.