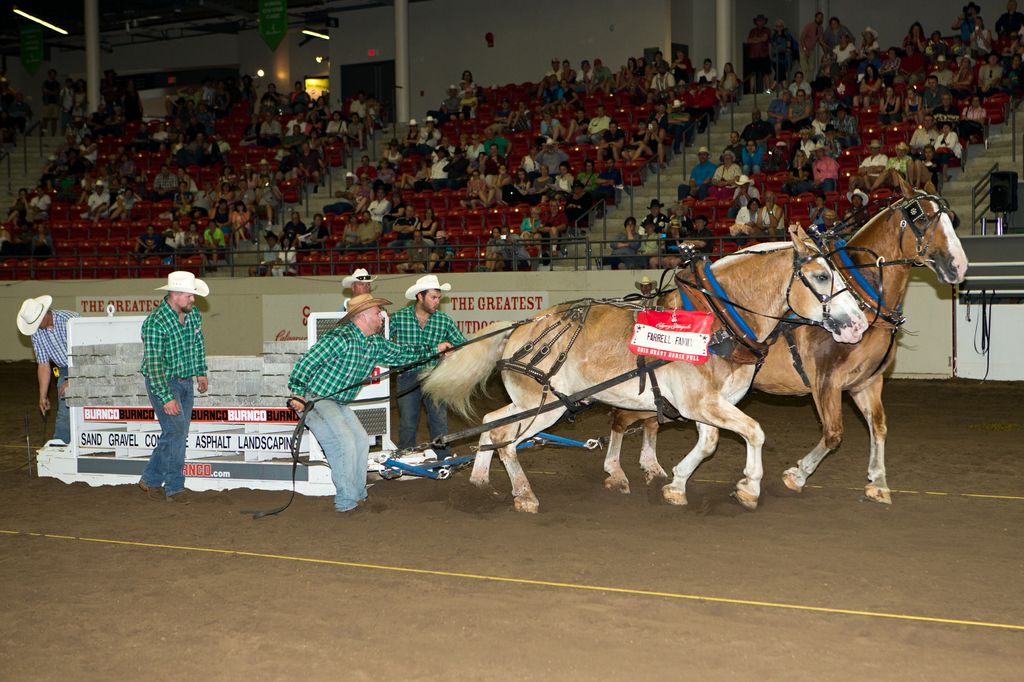 Reserve Champion -   Red and Bud – Randy Dodge, Albany, OR for the Antony Family

Calgary – On a muggy Friday night, a large and enthusiastic crowd sat in the air-conditioned comfort of the Agrium Western Event Centre and witnessed Cameron Witman achieve a long-nurtured ambition. The young Ferndale, WA puller urged his two Belgians, Ben and Nick, to victory in the Light Weight class of the Calgary Stampede Heavy Horse Pull.

The Lightweight class is limited to teams that weigh in under 3,200 pounds in total. Ben and Nick weighed in just three pounds under the cut-off. Heavy Horse Pulling continues Saturday evening at 7pm in the Agrium Western Event Centre with the Middleweights, who weigh over 3,200 pounds but under 3,500 pounds.  The Heavyweights, 3,500 pounds and over, are the grand finale on Sunday, July 12th, also at 7 in the Agrium WEC.

Although Light Weight teams weigh 3,200 pounds, the horses of both Witman and Dodge managed a full pull of 14 feet in round nine with 10,000 pounds on the sled – over three times the weight of the animals pulling. The next 500 pounds would tell the tale. Dodge’s winning team from last year could only drag the sled a couple of feet. Witman’s duo managed to get a little over a foot further. “Far enough,” as Cameron put it.

Last year Ben was teamed with another horse under the direction of Cameron’s brother Carson. Although Carson’s work schedule kept him from coming to this year’s Stampede, Cameron said, “We have all our horses in one barn together. We train as a family and we pull as a family.” The Witmans have been following that formula for quite a while. “I’m a third-generation puller on both sides, my Dad’s and my Mom’s,” Cameron explained. “Dad used to say, ‘When people go camping, we go horse-pulling.”

The reason Ben had a new partner, Cameron said, is simply that he wanted to try something new. “You have to find the right combination. Gait, speed, size and mindset are all things that go into it.”

His last competition was in Denver in January, Witman continued. “I’ve just been staying home and doing my homework to come here. This is the best pull, the biggest pay and the most fun pulling contest we go to all year.”

After a number of tries, finally taking a Stampede buckle is pretty exciting, Cameron said. “We’re on cloud nine. It feels phenomenal, but I can’t get too excited. We’ve got more horses tomorrow night and Sunday. As a family, we’re going for the triple.”