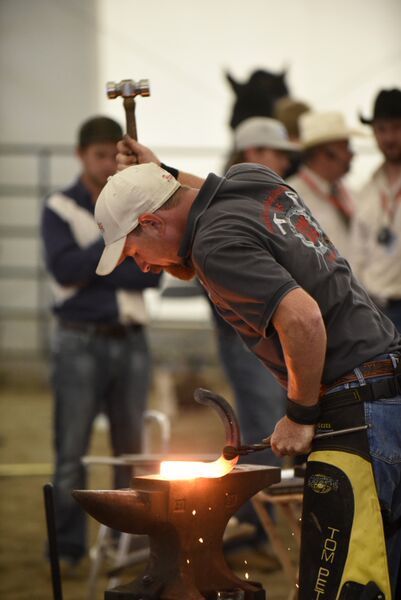 Calgary – Blacksmiths have been competing at the Calgary Stampede for the last 36 years. For 2015, the format changed to a team versus team concept. Two Canadian teams and two American teams spent some long hot days before the World Champion Blacksmith Team from the U.S. ended up with the Grand Champion buckles and the $8,000 winners’ cheque in the Calgary Stampede Blacksmiths’ Classic presented by Mustad

The action in the CSBC began on Friday, July 10th, on the Country Trail alongside the Agrium Western Event Centre at four open-air forges. From late morning until the late afternoon, it was fire and heat and the sound of hammers on steel as each team built eight shoes up from bar steel. Also on Friday, the Individual Speed class competition gave each individual team member fifteen minutes to show their skill.

On Saturday, July 11th, the competition moved to the Northern Lights Arena where each team prepared the feet and installed the shoes on two saddle horses in a maximum time of 120 minutes. The judges, one expert from Canada and one from the U.S., assessed every step of the process from the first strike of the hammer to the driving of the last nail.

The final on Sunday, July 12th, was in the Northern Lights Arena again and similar to Saturday’s competition - except the horses being shod were big, powerful draft horses. At the end of the day, just fourteen points separated the top team from the fourth-place squad.

Two members of the winning team had competed at the Stampede before. Cody Gregory is the second generation of his family to swing a hammer in blacksmithing competition in Calgary. “It was a great format,” he said. “The best thing about it is the team we got to bring up and compete with. We’ve got quite the brotherhood.”

Dusty Franklin was making his fifth appearance at the Stampede and the new format works for him. “I love it. This is way better,” he said. “Everything’s won or lost as a team. We have four team members who know where they’re good and what they need to work on. We put everyone where they need to be to get the best score.”

He’d heard of the Stampede blacksmithing competition, said Tom Petersen, and after having a taste of it, he’ll be back. “It was very educational and fun to do,” he said. Petersen enjoyed the calibre of competitor he was up against. “They were all very challenging to compete against.”

The very hot conditions of the first two days of the competition made working with forges and hot steel a physical trial for competitors in the CSBC. According to Lamar Weaver, “I tend to perform better in the dry heat. I’m from Pennsylvania and we’ve been having 80 to 90 percent humidity.” The lower humidity in Calgary suited Weaver fine, but, he noticed, “The altitude can affect your performance.” Weaver, too, is certain that he’ll be back for future Stampede competitions.

There was lots of blacksmithing going on outside the Calgary Stampede Blacksmith Classic. Those wanting to see, hear and learn more about the art and science of blacksmithing could visit the Country Trail display every day of Stampede to hear the hammers, feel the heat and learn a little about an old, but still necessary, skill.