CALGARY – They are the working-class heroes of the agricultural world. But every stock dog has his 15 minutes of fame . . . and these lucky dogs have managed to go from trial tribulations to Tinseltown. 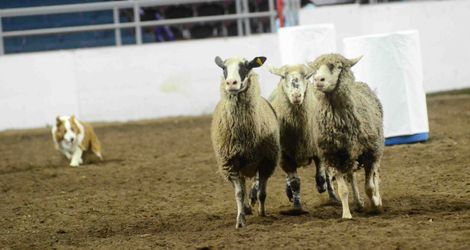 “One of my dogs, Zeke, has actually been featured as the star of a movie. It was a Hallmark movie called Duke, and he was Duke — did the whole movie himself, last fall,” says Diana Gauthier of Lumby, B.C. “He’s just full of the tricks and the behavior to be a movie star.”

Gauthier is a perennial threat at the Calgary Stampede’s World Stock Dog Championship, presented by Sasol Canada, after winning the big prize in 2007 and coming close to a title repeat in each of the past three years. She’ll be back for this year’s edition, to be held Sunday, July 8 and Monday, July 9 at the Scotiabank Saddledome, with two of the three stalwarts from her Keen-Eye Stock Dog Training Center — Kit, Skor, or Zeke himself.

Gauthier established the Keen-Eye stock-dog training and breeding program back in 1990. And in recent years, to her surprise, Gauthier and her loyal companions have also been in high demand on the movie set — as handlers and trainers of livestock on the big screen, the small screen, and the odd TV commercial. In fact, during this particular interview, she was speaking from a movie set on British Columbia’s Lower Mainland, where her Keen-Eye companions were keeping a watchful eye on sheep and goats and pigs, and filming was to continue well into the night.

“It’s quite interesting, never boring. I’ve trained pigs to behave a certain way for a movie scene,” she says. “And the dogs are a big part of training any sort of livestock. They help to ensure the type of behavior I need to have happen for a particular scene . . . they’re like my right hand.

“I’d say the hardest task I ever took on was for the movie 2012 (starring John Cusack and Amanda Peet). My dogs and I had to work a herd of sheep, on set, with a helicopter hovering right above and a camera attached. The dogs could barely hear me . . . I was wearing brown, and I had to cover my two dogs up and hide them underneath me, so the camera wouldn’t pick us up during an overhead shot.”

With $10,000 to the winner, the Stampede’s World Stock Dog Championship, presented by Sasol Canada, is North America’s richest indoor stock dog trial. This year’s 16th annual edition, held entirely at the Saddledome, will see 60 handler-and-canine teams from across the continent start things off at 8 a.m. on Sunday, July 8. After two preliminary rounds of competition, the top 12 teams will be welcomed back for the final round at 7 p.m. on Monday, July 9.

Dogs will have a maximum of four minutes to guide three sheep around a demanding obstacle course of barrels, through a chute, and into the pen.

Last year, Dale Montgomery of Maple Creek, Sask., claimed an astonishing sixth Stampede crown, with six-year-old border collie Ben stopping the clock in a winning time of two minutes, 10 seconds. Montgomery had previously hoisted the World Stock Dog Championship trophy in 1999, 2000, and 2003 with Gyp, and in 2006 and 2008 with Tex.

With a little luck, Gauthier would also be entering 2012 as a multi-time champion. Last year, Gauthier and Skor, a five-year-old male border collie, finished third overall in a time of 2:43 — but she and Kit, Skor’s seven-year-old sister, also had two in the pen at the 1:38 mark, with the final stubborn ewe refusing to co-operate. In 2010, she and Kit also placed third, in a time of 2:34. And in 2009, Gauthier and Teag — the mother of Skor and Kit, and the dog with whom she claimed that ’07 Stampede crown — finished second to Pam Boring of Pink Mountain, B.C., and Mirk by a paltry second.

Even though the wild card in the deck, so to speak, is the pen of sheep drawn by each team — and their relative temperament — Gauthier says she doesn’t believe much in luck.

“You’ve got to make the best of it if you do draw a rogue sheep. Part of a working dog’s ability is to be able to compensate for difficult sheep,” she says. “My timing, and my perception of what the sheep are going to do, have a huge effect on the outcome of the dog and I handling that sheep.

“I have to be able to recognize what’s going to happen before it happens, in order to alleviate that problem. A lot of it really is up to the handler.”