Calgary – This evening the Calgary Stampede recognized and honoured three inspiring individuals and one noteworthy group based on their commitment to western heritage and values at the 11th annual Western Legacy Awards. 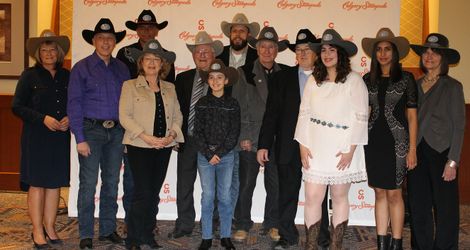 This year, Calgary Stampede President and Chairman of the Board, Bill Gray recognized Ann McCaig and Steve Snyder with the Chairman’s award for their dedication and passion for the Calgary Stampede Foundation and the success of the Foundation’s recent capital campaign. Together McCaig and Snyder were co-chairs of the ‘We’re Greatest Together Campaign’ that raised more than $100 million.

This year’s recipients are community leaders who genuinely have a passion for preserving and promoting western heritage, exemplified by their outstanding contributions to the southern Alberta community.

At the tender age of five, Quinn Clark started his volunteer career with a commitment to make a difference in his community. He had a passion for people who struggle with access to adequate and nutritious food. He connected with the charity group CUPS, and has been a tireless volunteer for them ever since. At the age of 10, Quinn spearheaded the CUPS campaign, “Quinn’s Challenge”, and raised $13,000 for the charity. He has expanded his volunteer commitment to include serving “Feed the Hungry” at the Roman Catholic Diocese on Sunday nights. Quinn continues to inspire and mentor those around him and is currently working on new ideas for fundraising.

This isn’t the usual story of someone’s dream to help others, but rather a series of events that turned a young boy, experiencing numerous childhood struggles, into a caring adult. Graduating at age 17 to the streets of Toronto, Brad Fisher was homeless and alone. From his life experiences, Brad has developed a remarkable program to aid the homeless men and women on the streets of Calgary. Day and night, he acts as an independent first responder for homeless people in distress. As well, every Friday, Brad takes 25 homeless souls to a sweat lodge on the Tsuu T’ina Nation for a Native spiritual experience. Thousands of Calgary’s invisible homeless have enjoyed this experience because of the dedication of Brad, fondly named ‘best Friday Brad’. Brad dedicates his life to helping the homeless in our community and is truly an inspiration to all.

Chuck Groeneveld has been involved as a leader and model for the western community for many years. He exemplifies the Calgary Stampede, its values and its history. Chuck entered his first calf at the Stampede in 1945 and has been involved 69 of the 70 years since then. He understands the traditions of years gone by and embraces the changes that time and technology have brought. He is dedicated to his family, farm, and home life and has been an amazing spokesman for Alberta Beef/Simmental Cattle for over 50 years. Chuck was awarded the 1981 Bronze of the Alberta Simmental Producer of the Year. Any agriculture community, big or small, young or old in Central or Southern Alberta knows Chuck very well for his travels from trade show to trade show to tell the good word about Western Pride and our amazing agriculture.

When a young person decides they want to get off the streets, they can come to The Doorway. This is a community funded business-oriented space where young people choose to participate in a non-traditional, community run integration project, with space to think, community members to learn with and tools to plan their lives with their own ideas. Since 1988, The Doorway has been a bridge between street and mainstream cultures where participants progressively work towards sustainable economic independence (legal, income and housing). The Doorway is a community delivered and funded project, where young people work with engaged community members to learn what it takes to get off the street.