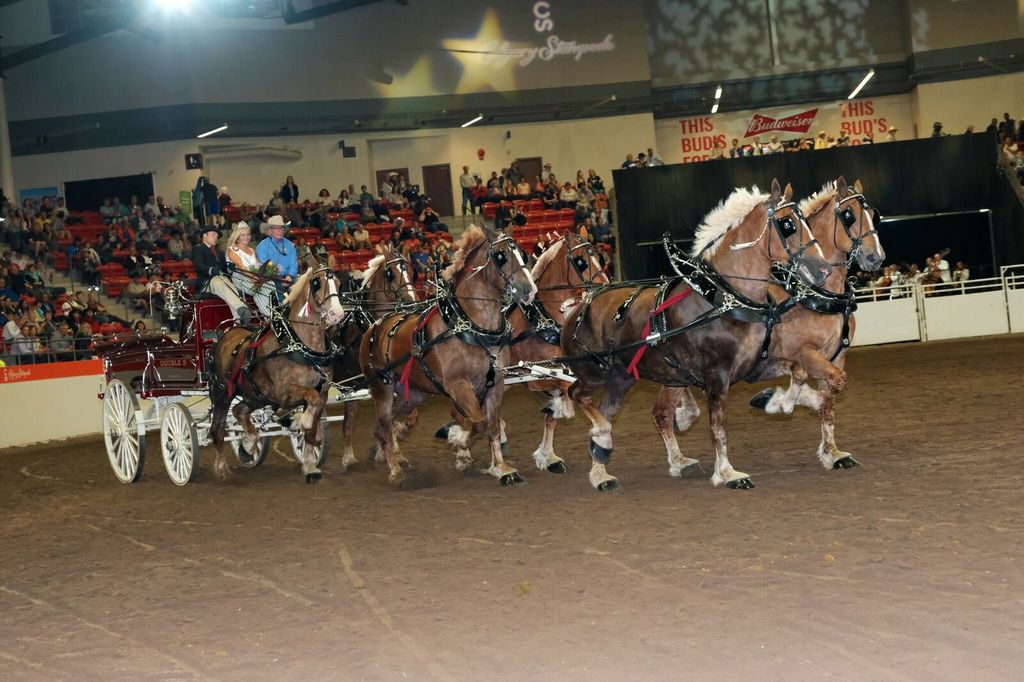 CALGARY— Some kids talk their parents into buying them cars. Sean Smith convinced his dad to get a six horse hitch.

In 2010, Sean was immersed in the world of heavy horses, working for a Clydesdale operation in Oregon. His father, Bryce, was interested enough to give it a try. Eight years later, the family’s Double S Belgians high-stepped their way to the top spot in the World Champion Six Horse Hitch at the Calgary Stampede.

“From zero to 100? We’re at 99,” an elated Bryce Smith said Tuesday night shortly after his hitch’s win, which came with a cheque for $15,000 and a Stampede belt buckle. “This team can go all the way to the top. Today was an example that we can compete at that level. The competition here was very, very good. The depth of field here was outstanding.”

All four heavy horse breeds — Belgians, Clydesdales, Percherons and Shires — were represented at the World Champion Six Horse Hitch, one of the 123 classes in the Stampede’s Heavy Horse Show. Three teams of two horses formed each of nine hitches that were graded by a three-judge panel on conformation, presentation, driving and reinsmanship. The hitches put on smooth displays of grace and power as they moved across the floor of the Nutrien Western Event Centre to an energetic soundtrack provided by members of the Calgary Philharmonic Orchestra.

In 2012, the Double S Clydesdales came to the Calgary Stampede for the first time. This year, audience members met the Double S Belgians. The hitch, out of Rexburg, ID., is an amalgamation of horses from the Country Lane Belgians hitch and Smith’s hitch. When Sean started a business with his brother, he handed the reins of the growing enterprise to Kyle Forsyth, who drove Country Lane to the Champion title in 2012. One of the horses from that hitch was in lead position Tuesday night.

“It’s kind of neat to have him around. He is our favourite horse, too, so that makes it even better,” Forsyth said. “And we had another drive-off (like in 2012). The first go was only okay. A competitor lost a shoe outside, so we took his spot (in the first heat, rather than the scheduled second go). It was a bit of an adrenaline rush getting in there, and it seemed a bit rushed and took a bit to get steady. In the drive-off, they were ready and they turned it on really well.”

The teamster manages the day-to-day management of the hitch, with wife Marcia assisting.

Sean said his dad didn’t need much convincing to buy that first hitch, which started with a 1901 original freight wagon and two horses out of Minnesota.

“He saw what I was doing and he got hooked as bad as me,” Sean said. And the rapid rise of the hitch is still a bit of a shock to him, but the horses’ willingness is what fuels that success. “They all enjoy driving. Really, they all love to drive. They all know their job and are ready to do it anytime they’re called on.”

That tentative foray into the world of heavy horses has become a passion for Smith, who retired last year after selling his portion of Tillamook Country Smoker.

“I really enjoy the competitive nature of it all, which goes far deeper than what people know. Once you understand the industry and you see what's going on, even small moves in the industry mean a whole bunch,” he said. “That's one of the reasons why we built this team, so we can compete for No. 1. And we're there. Winning and losing now is in the eyes of the judge, and whatever he sees, that's just the way it is.”

Despite the competitive nature of the industry, Smith can’t say enough about the people in it.

“Over the years, we’ve gotten a lot of help from some of the more successful hitches. We’d talk to them and get pointers and helpful information. Now, we’re at a level where we can do that for others who are coming up. It’s great.”

Visit ag.calgarystampede.com/results for full results from the World Six and the Heavy Horse Show.