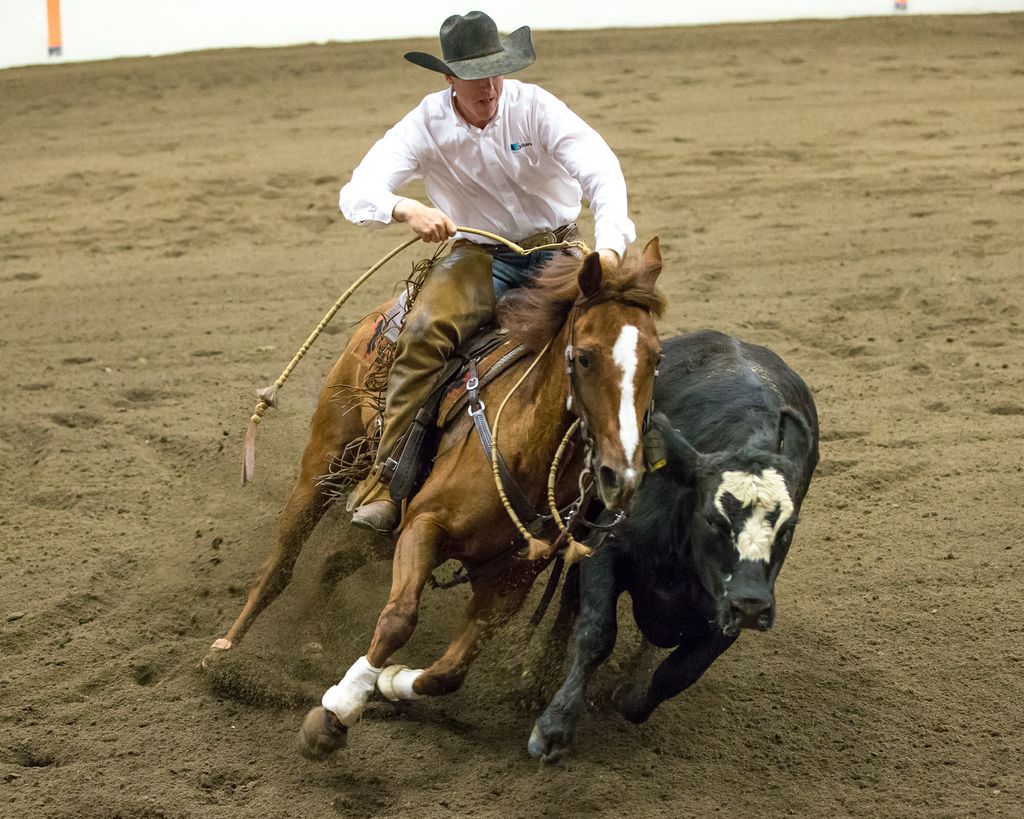 Calgary – John Swales wasn’t sure which was more challenging: his three winning rides in the Calgary Stampede’s Working Cow Horse Classic on Friday, or wrangling the sprawling crew of friends, family and officials for the photographs commemorating his victories.

But Swales has a knack for making even the most difficult challenge look easy. The Open Bridle division of the event might as well be called the John Swales division, as the Millarville, Alta.-based horse trainer has now won it 10 times since its inception in 2001. That history didn’t come into play when he entered the arena at the Agrium Western Event Centre on Smart Marina, though.

“Every time is different. She is a little weaker in the reining — she always has been — but she is probably the best fence horse I’ve ever had,” Swales said of the 10-year-old mare. And that’s saying a lot, as the 40-year-old can’t remember a time when he wasn’t riding. “As long as they turn a decent cow in for her, she is going to do her very best.”

That she did, as the duo laid down a 290.5 (141.5 for rein work; 149 for cow work), replicating their total score in the first go. That 581.0 aggregate earned Swales and the 10-year-old mare owned by Jim Baird, also of Millarville, a $5,620 payout in addition to yet another Stampede buckle. Calgary’s Suzon Schaal was named reserve champion for her aggregate score of 575.5 on Genuine Brown Girl, taking home $4,215 and a buckle.

In the Working Cow Horse Classic, horse- and-rider teams are judged on their authority, discipline and precision in reined work and cow work (also called fence work). This year’s final ran on the No. 7 pattern: the reined portion consisted of a predetermined series of moves that included large, fast circles; small, slow circles; lead changes; straight runs; sliding stops and 360-degree spins (also called turnarounds). In the cow work portion, the teams first box a steer, then maneuver it along the fence, heading it off and turning it both ways, before circling it once in each direction in the centre of the arena.

The Open Bridle one-two results were a reversal of last year’s final, when Swales finished second to Schaal’s first.

“It’s a friendly competition,” a smiling Schaal said. So much so that Swales roped her into appearing in some of those official photos. And it makes sense, as Schaal is Swales’ vet and he helps her with some of her horses. That’s not to say there won’t be a tiebreaker in the event next year.

But those weren’t the only buckles Swales and Schaal earned. Riding back-to-back horses, Swales claimed the champion and reserve champion spots in the Open Hackamore division. His aggregate score of 586 on Big Time In Cowtown, owned by Robbie McKay of Black Diamond, Alta., nabbed top spot and a cheque for $4,620, plus that champion belt buckle. Swales’ 580.5 on SLR Won Smart Wolf, owned by Keri Hudson-Reykdal of Ashern, Man. took reserve, the accompanying buckle and $3,850.

Schaal, meanwhile, started her afternoon off right in the Non-Pro Bridle finals. Riding her seven-year-old mare Chics Ruffled Up, the five-time world champion posted a 289 to add to her first go score of 287. That aggregate score of 576 was enough to best the closest competitor, Carlene Schmidt of Airdrie, Alta. who came in with a total of 574.  The win — and its accompanying $2,490 and champion Stampede buckle — wasn’t a sure bet, however. The judges whistled for a new cow for Schaal twice, as the first two animals didn’t have much git up and go.

“I was getting nervous because she gets kind of tired having to work so hard,” the Calgarian said shortly after her win.

But the third time turned out to be the charm for the veteran competitor as she and Chics Ruffled Up laid down a 145 in cow work, enough to take the top spot. For full results, please visit http://ag.calgarystampede.com/results