The three equine stars of TAILS have distinct spirits

The three equine stars of TAILS have distinct spirits

Calgary – A born leader, a follower and a mischievous adventurer will capture the audience’s imaginations and hearts at the new ENMAX Corral Show – TAILS: Three Horses. One Legend. during the Calgary Stampede, July 6 to 15. Travesio, Liberté and I’pah’ka Pi are as unique as the sun, the moon and the earth. With individual dispositions and strengths, the three equine stars’ distinct spirits catalyze their bond into a lasting friendship. 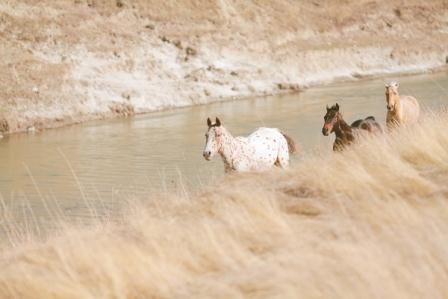 “Due to the strong character profiles of the equine stars, TAILS engages the audience by encouraging them to separate fact from fiction and to associate with the different equine stars depending on their own individuality,” says Dan Finley, executive producer, TAILS.

Living up to his name, Travesio – which is Spanish for mischief – is a flashy, fearless jester, as bold as his golden palomino coat and silver mane. With a tendency to act before he thinks, he has gotten himself into trouble more than once. Descending from the noble Andalusians who came to North America with the conquistadors, Travesio is an adventurer and explorer that will rush in where angels fear to tread.

Liberté, a handsome bay hailing from Quebec has seen more of Canada than most, having travelled with a fur trader across the west. Steadfast, loyal and hardworking, Liberté is more a follower than a leader. His intelligence, strength and common sense are an inspiration to his companions.

I’pah’ka Pi is Blackfoot for storm. Born to run wild and free, he is separated as a youngster from his family in a canyon rockslide, and is forced to forge his own way. A born leader, he is well equipped to survive with his quick wits and fleetness of foot. With a spotted coat that camouflages him in wild surroundings and a keen vigilance that alerts him to danger, he is the horse that his companions look to for guidance.

“Spirits are in all living creatures,” says Michael Barnard, director, TAILS, “ but none as powerful as that of the o’tas – the horse. When the markedly different spirits connect, a true and lasting friendship forms because they make up for each other’s differences.”

Come explore a burgeoning friendship and discover whose spirit you most associate with – Travesio, Liberté or I’pah’ka Pi – at the ENMAX Corral Show – TAILS: Three Horses. One Legend. during The Greatest Outdoor Show on Earth, July 6 to 15.